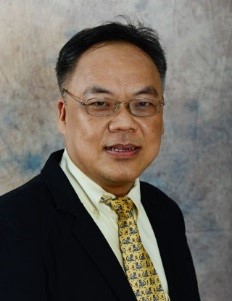 Abstract: In this talk, a novel method that will aid in the visualization of vein topology on a target area on the body of a human subject is presented. An external cooling means is configured to cool the left forearm of fourteen study participants, effecting an active thermal change or recovery in the target area upon removal of cooling. An infrared (IR) thermal camera was used to capture a series of transient thermal images. These images were then processed to extract Dynamic Synthetic Images (SI) throughout the active thermal change or recovery process. Dynamic SI was calculated using a new quantitative parameter named Tissue Activity Ratio (TAR), defined by the rate of rewarming to the rate of cooling at each pixel of interest. A fixed step size of rewarming temperature (0.5 ) was used to progressively extract multiple synthetic images throughout the whole recovery process. Compared to a Static SI extraction method, where only a single SI results from the whole active dynamic thermography (ADT) sequence, our study demonstrates a live feed of high contrast vein visualizations by using the novel Dynamic SI method. The dependency of Dynamic SI contrast on the temperature of the external cooling stimulation was investigated. Three cooling stimulation temperatures (5 , 8 , and 11 ) were tested, where no statistically significant difference in the resulting SI contrast was found. In all, I will discuss on assisting venipuncture or cannulation-based clinical applications, through the incorporation of the proposed method with a projection system.

He is the:
* Lead Editor-in-Chief for the ISI Journal of Mechanics in Medicine and Biology for dissemination of original research in all fields of mechanics in medicine and biology since 2000;
* Founding Editor-in-Chief for the ISI indexed Journal of Medical Imaging and Health Informatics;
* Associate editor or EAB of various referred international journals such as Applied Intelligence, BioMedical Engineering OnLine, Computers in Biology & Medicine, and, Journal of Advanced Thermal Science Research.
More details can be found in: Cv: https://dr.ntu.edu.sg/cris/rp/rp00847.

Ng obtained Ph.D. at Cambridge Univ. and elected as an Academician for European Academy of Sciences and Arts, a Fellow of The American Society of Mechanical Engineers; The Institution of Engineering and Technology [UK], and International Engineering & Technology Institute [HK]. He researches in numerical simulation in the biomedical engineering, thermal-fluids and health-related diagnosis fields. He is Editor-in-Chief for 2 ISI-journals which were captured by the JCR within 2-years of their inauguration. He has been recognized internationally for academic excellence. He received numerous best papers, service awards and has graduated 23 PhD and 26 Master students. He was awarded the SPRING-Singapore Merit Award for his work in thermal imagers to screen SARS fever and contributions to the Singapore Standardization Program. Twenty-one of his papers have been adopted as references in Singapore Standard (SS-582, Parts 1&2: 2020) and ISO/IEC 80601-2-59: 2017. He serves as a panel member for Singapore Biomedical and Health Standards Committee since 2011. Being a co-inventor of 3 US patents on software classifiers to identify the different stages of breast cancer development in iTBra-system, he was accoladed with equity in a listed company. His ongoing work on non-contact screening for carotid artery stenosis and superficial vein-finder has resulted in 3 TDs. He has notable citations in the field of infrared physics & technology.

More details will be updated...